What is ColdFusion hosting

When it comes to developing websites, there are a ton of different technologies available today, from full-fledged management systems to simple drag-and-drop platforms.

Over the years, the need for a more streamlined and simplified development process has led to creating and improving different web development solutions.

In this article, we will look at one of such web development solutions called Adobe ColdFusion.

We’ll learn what Adobe ColdFusion is, how it works, and what it has to offer.

We’ll also take a look at its strong and weak points so that you can decide if it’s something worth learning and implementing into your development workflow.

What is Adobe ColdFusion?

Created in 1995, the original purpose was to simplify connecting front-end code (HTML, CSS, JS) to databases but has far outgrown that initial purpose by becoming a full-fledged development platform with an in-house IDE.

The language bridges the gap between frontend code and backend (database) code by using the default HTML tagging system as well as providing its own set of server-side tags to simplify implementation. 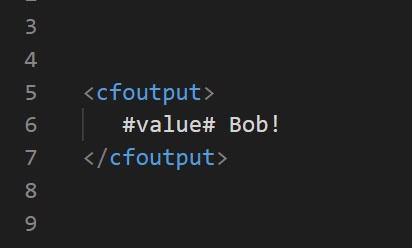 CFML isn’t the only server-side language supported by Adobe ColdFusion, though. Other languages such as server-side ActionScript and embedded scripts (written CFScript) are also supported.

What is ColdFusion used for?

ColdFusion is mainly used for data-focused websites and Private networks; it can create anything from simple REST services, SOAP web services, and WebSockets.

It is built for data-driven websites and simplifies data management with support for massive scaling.

Using ColdFusion for a static website would be overkill. The main strong point is how it integrates the backend of a web application with the frontend; static websites do not feature databases or any form of data management.

One of Adobe ColdFusion’s strong points is its speed when it comes to developing applications.

Not only does it feature an easy-to-learn programming language, but it also provides all the necessary tools to convert an idea into a working solution in record time.

It provides an already-made codebase for most common scenarios developers encounter when creating an application, unlike other development solutions.

You can think of ColdFusion as a toolbox instead of a custom programming language; instead of writing functionality for simple tasks like sending queries to a database, CFML provides tags that streamline the process, making your code optimized.

This doesn’t mean you can’t custom code your way into things, but having many essential functions (CFML tags) that help you achieve the same result faster makes ColdFusion an excellent choice for Rapid Application Development.

If you’re used to languages like PHP, then you’d know just how frustrating it can sometimes be when you’re trying to connect and integrate a database with your frontend code.

This is the same for many web development solutions, there’s no streamlined way of achieving database integrations, and a lot of custom code has to go into it.

With ColdFusion, integrating with a database is as easy as clicking a few options.

ColdFusion treats databases or any other form of data storage as Data Sources. 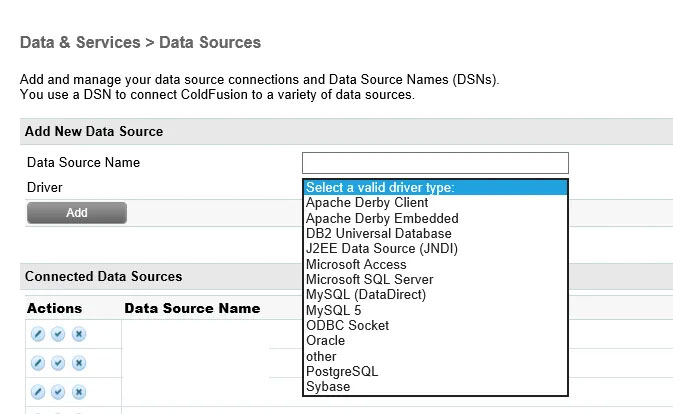 Integrating with a database is made simple using the Data Source feature as no custom code needs to be added to your source code to handle it.

ColdFusion also uses the CFQuery tag to pass queries to an added data source, so everything is already streamlined for data rendering implementation purposes.

ColdFusion runs on JVM (Java Runtime Machine), .Net Framework, and Google App Engine, which are major environments in which applications are deployed today.

Since it runs on major environments, this makes it an excellent choice for creating cross-platform applications; it also boasts a WAS (Web Application Server) that can be incorporated with many other development platforms.

ColdFusion also supports mobile application development for different platforms, and you don’t have to worry about a specific platform; it handles all the dependencies and code generation.

An important information worthy of mentioning is that ColdFusion applications can only run with specific web hosting companies that actually support ColdFusion in their servers. You can find out all about it by checking this hosting selection for CF.

Ease of use / Learning Curve

ColdFusion borrows its syntax from HTML (tags) and JavaScript (CFScript), making it easy to get started with, especially for beginner web developers.

Most development stacks out there focus on creating custom syntax that in many ways feel entirely unrelatable for core web technologies like HTML.

PHP, for one, uses a ton of software development concepts and coding practices that any beginner web developer would struggle with.

Learning ColdFusion for many beginner developers feels very natural; the tagging system is something almost every front-end developer has already used anyways, so what are a few more tags with powerful functionalities. 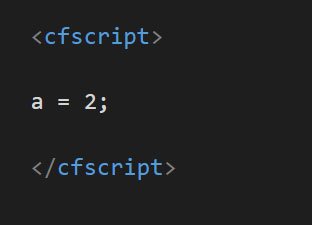 CFScript is also very similar to JavaScript; this similarity in syntax is the main reason why ColdFusion is so easy to use and learn in a short period.

ColdFusion might not be the most secure system globally, but it has fewer vulnerabilities than most of its competitors.

Adobe, for one, regularly releases security patches when new vulnerabilities are reported, so you’re not left to handle security risk on your own; you have a team of developers constantly releasing fixes.

ColdFusion is very secure from XSS type of vulnerabilities because of a built-in library called OWASP ESAPI.

It also ships with built-in security functions for encryption, hashing, and authentication.

Other than that, ColdFusion also ships with a good number of security tools to ensure your applications remain secure.

These include Fixator (A code vulnerability scanner), Auto Lockdown (A One-click App Lockdown utility), and Security code analyzer (Adobe’s version of the Fixator).

One of the significant reasons why ColdFusion is still very much relevant today is that it keeps getting better.

Every year, adobe releases new features and better versions of ColdFusion; from stability to security, there’s always a revamp and performance boost.

These updates have consistently been released for over a decade, showing just how dedicated the Adobe team is regarding supporting companies and developers using ColdFusion.

With ColdFusion, you can rest assured that your applications won’t get abandoned anytime soon.

There are many popular alternatives to ColdFusion in the market; this has taken a toll on the total number of companies and developers using ColdFusion.

With new innovative backend solutions like Node.js and frontend frameworks like Vue.js, many ColdFusion developers have transitioned.

The amount of jobs available for ColdFusion developers has also dropped drastically compared to modern and popular alternatives to developing websites.

ColdFusion is old, created 25 years ago its community has drastically been affected by new trending technologies with similar features.

It would take some serious publicity and revamping of the entire technology to attract new developers as there are far better and more flexible solutions in the market today.

No or Less Support from Public APIs

When was the last time you visited a web application or platform with API tailored for just ColdFusion? Most websites or information-based API create PHP, JavaScript, and Python implementation and integration with their API but not for ColdFusion; you always have to find a workaround to interact with even the most common APIs available today.

Sadly, this is a sign that ColdFusion is continually losing relevance in the industry. 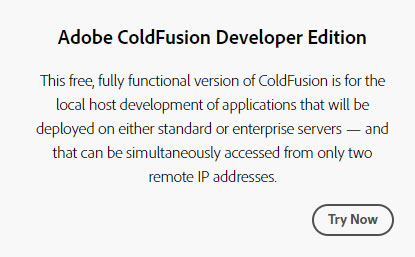 Adobe offers a free version of ColdFusion (Adobe ColdFusion Developer Edition), allowing developers to get started and test out ColdFusion on their local server or standard/enterprise server.

You can also opt-in for a free 30-day trial of the complete application just to test things out and make a decision.

If you decide to use Adobe ColdFusion for production, you’d have to pay either the standard or enterprise version of the application.

Yes, there might be many competing web development solutions right now (Node.js, ReactJS, PHP Laravel, etc.) with huge communities built around them, but that doesn’t mean ColdFusion is dead in 2021.

In fact, ColdFusion has continually been improved every year by Adobe since they acquired the product in 2005.

With every new version release, many exciting features on par with the most recent web development technology are introduced.

The main concern with Adobe ColdFusion is its drastic drop in terms of adaptation and use since it was initially developed (26 years ago).

It doesn’t mean the technology is dead, though; it just means it’s not as popular in the industry as it used to be.

This article has discussed Adobe ColdFusion, what it does, and all of its pros and cons.

Whether you’re just hearing about it for the first time or have had previous experience with the technology, this article should have provided an insight into its usage today and help you decide if it’s still worth learning in 2021.